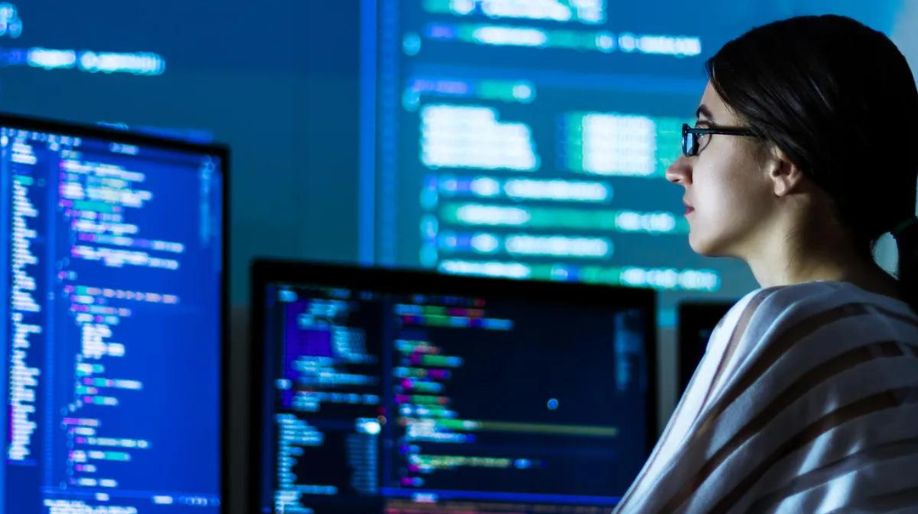 Geometric Progression, Simultaneous Equation Solver, Prime Number Tester, Factors Finder are some of the mathematical programs that we can create.

Simulation programs such as Projectile, Simple Harmonic Motion, and Star War etc. are some of the science programs that we can create.

We can create business applications which are more helpful to manage your business and increase productivity. 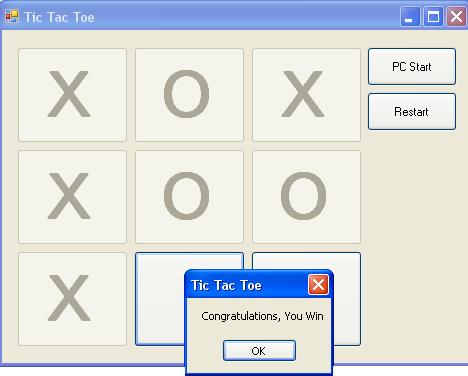 Before we could write programs on VB 6, we need to install the Visual Basic 6 compiler on our computer.

After installing the vb6 compiler, the icon will appear on your desktop or in your programs menu.

Click on the icon to launch the VB6 compiler. 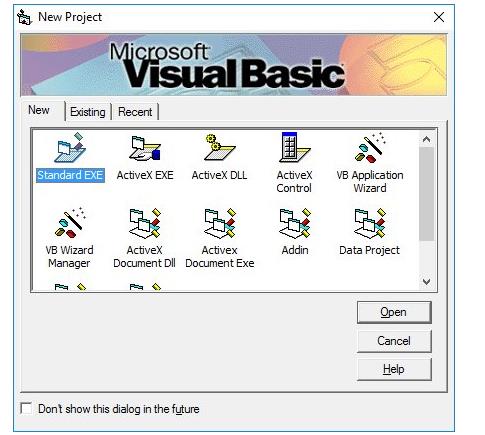 You can choose to either start a new project, open an existing project or

There are various types of applications that we could create, however, we shall concentrate on creating Standard EXE programs (EXE means executable).

The Visual Basic 6 Integrated Programming Environment is shown in the below picture which consists of the toolbox, the form, the project explorer and the properties window. 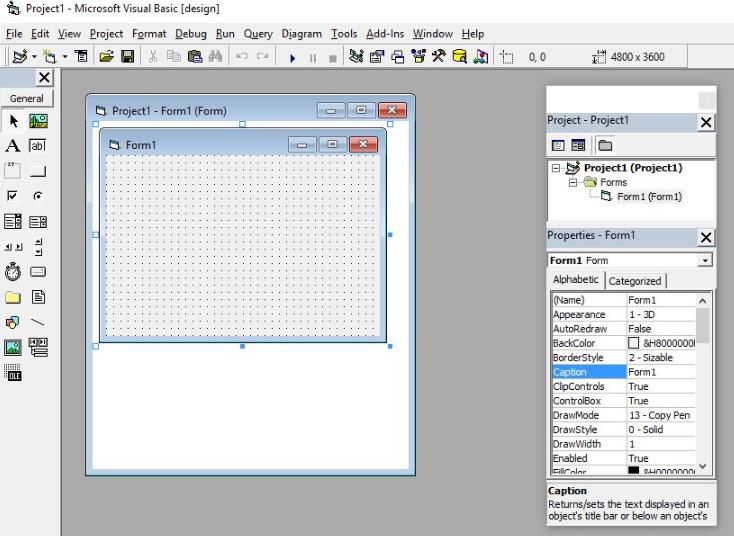 The Form is the primary building block of a Visual Basic 6 application.

A Visual Basic 6 application can actually comprise many forms, but we shall focus on developing an application with one form first.

You can save the project by selecting Save Project from the File menu, assign a name to your project and save it in a certain folder.

In the VB6 IDE, a default form with the name Form1 will be presented to you. Next, double-click on Form1 to bring up the source code window for Form1.

The top of the source code window consists of a list of objects and their associated events or procedures.

In the source code window, the object displayed is Form1 and the associated procedure is Load. 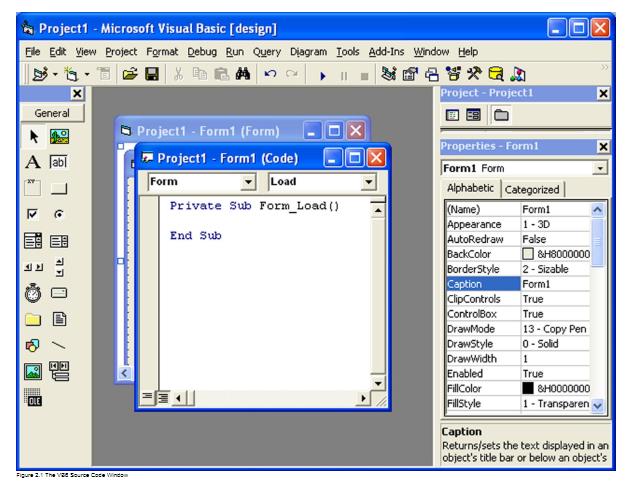 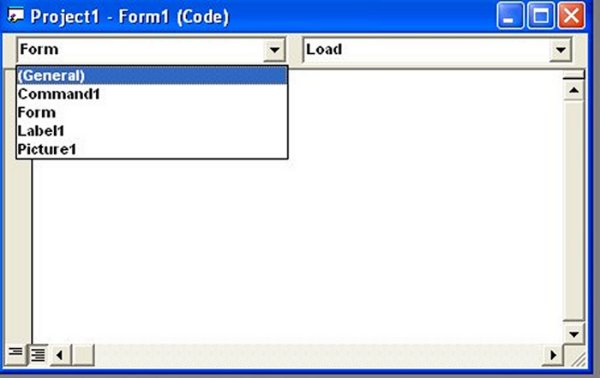 Similarly, when you click on the procedure box, a list of procedures associated with the object will be displayed. 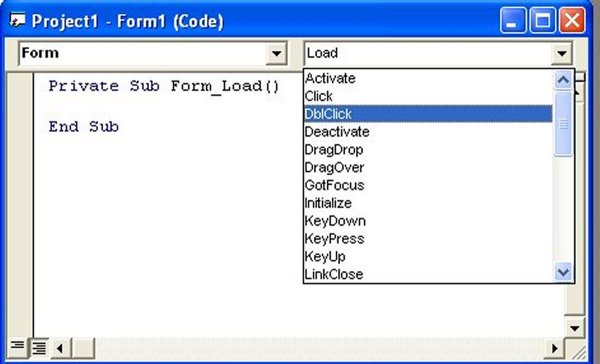 For example, in order to change the caption, just highlight Form1 under the name Caption and change it to other names. You may also alter the appearance of the form by setting it to 3D or flat, change its foreground and background color, change the font type and font size, enable or disable, minimize and maximize buttons and more.

To start writing code for an event procedure, you need to double-click an object to enter the VB code window. 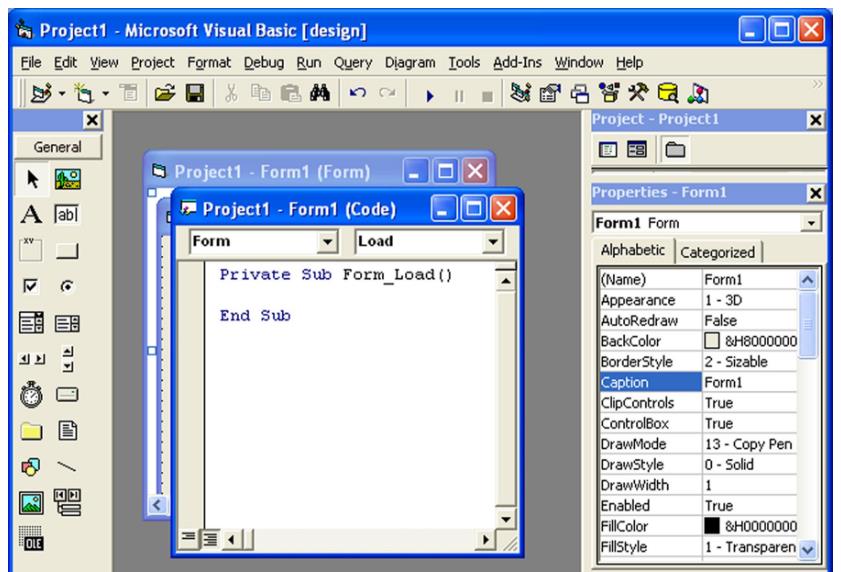 The structure of an event procedure is as follows:

The syntax of the Visual Basic’s program code is almost like the normal English language, though not exactly the same.

Here the Object and Property are separated by a period (or dot).

We have access to all kind of data in your regular routine.

For example, we need to handle data such as names, addresses, money, date, stock quotes, statistics and more every day.

Likewise, in Visual Basic, we have to deal with all kind of data; These data can be mathematically calculated while some are in the form of text or other forms.

We can write a Visual Basic procedure that allows the program to run repeatedly until a condition or a set of conditions are met.

There are three kinds of loops in Visual Basic –

To perform basic four arithmetic calculations we can use a combo box that includes four operators, addition, subtraction, multiplication and division.

Use the below code: 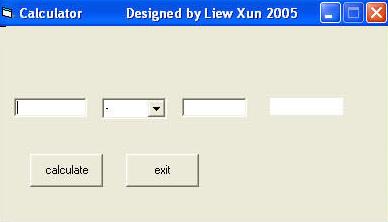